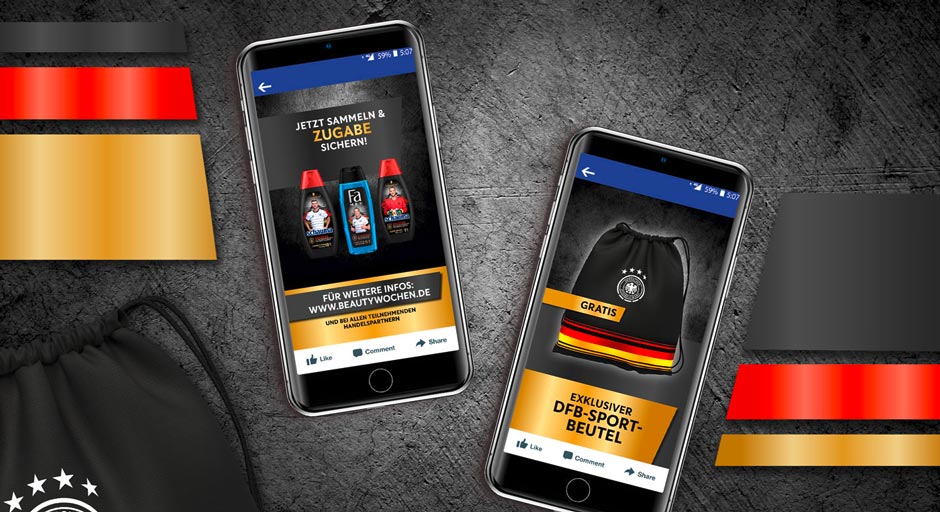 Animation and CGI as parts of our digital future

As a packaging agency, we naturally move with the times and evolve alongside the digital future. For this reason, our clients already appreciate our expertise in the field of animation and CGI.

For this project the Schauma and Fa team tasked us with developing an advertising campaign for the social media space. The aim of the campaign under the main theme „UEFA EURO 2020“ was to activate customers for a competition. Schauma and Fa have launched matching products on the market, which represent the players of the national team. The aim is to increase sales through an accompanying lucky draw. If a customer purchases four products of the series, they can win a national team gym bag for free.

When designing the animation, we were inspired by the DFB’s world of colours and incorporated the rules of the overarching corporate design.
Our only restrictions were to adhere to the font „DFB Sans“ and to the proportions of the different colours. Likewise, the bottles of the respective players had to be represented.
Despite the constraints, we managed to give the video a pleasant flow and a dynamic look that will catch the eye of the target group and hopefully meets our client’s expectations..

One of the tasks was to adapt the video frequency to different asset formats, which have now been placed on the popular German internet site „Fussball.de“. Furthermore, the assets were published on the Facebook and Instagram pages of Fussball.de.

This advertising campaign is based on the previous campaign we developed last year. However, due to the Corona crisis the European Football Championship is only taking place this year. In the previous campaign, football clubs that suffered from the pandemic’s repurcussions were supported through the purchase of the products.


DFB activation campaign on the web

Maybe you are interested in more projects from baries design: